Sculptures Workshops at the Lessing-Gymnasium and BBZ 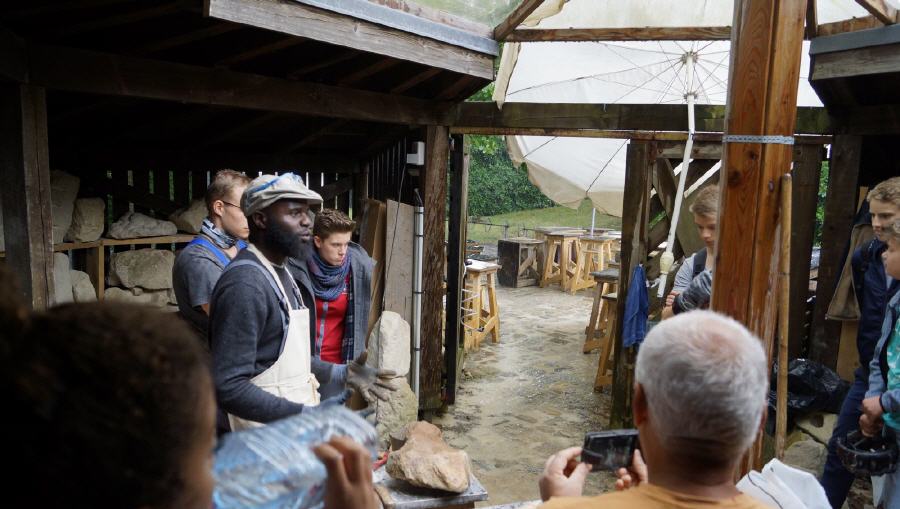 The Lessing-Gymnasium participated in the Africa project of the city of Norderstedt with several own projects, including a sculptor workshop with an artist from Zimbabwe, attended by 23 pupils and students of the LGN and 12 students of the BBZ, among others also students, the already participated in a Shona Sculptor Workshop at the LGN in November 2012.
For another sculpture workshop parents, teachers and other interested people were invited. The workshop for adults with six participants took place under the direction of Collen Nyanhongo, a renowned sculptor from Zimbabwe.

Under Nyanhongo’s guidance, the participants quickly wrestled impressive shapes from their stones. Some of them already had previous knowledge in sculpture and immediately implemented Collen’s suggestions. What was particularly new was that in Shona sculptures, the whole sculpture or parts of it are made to shine with wax by heating the stone, rubbing it with wax and polishing it.
Some end products of the adult participants can be seen in the following gallery.

Collen Nyanhongo, together with Thomas Behrendt, art teacher at the BBZ and cultural award winner of the city of Norderstedt, with the support of Ms. Meisel, art teacher at the LGN, led the grand course, for which Thomas Behrendt brought additional tools from other teaching venues. The stones were imported from Zimbabwe via the Shona-Art Gallery from Witten. There are serpentine and opal stones, typical of the sculpture in Zimbabwe.
The Rotary Club Norderstedt, with its generous donation of 2500 euros, made it possible to buy the stones, each worth about 50 euros. The students are allowed to keep the stones and only pay a large part of the fees with 18 Euro per person.

How did these workshops come about?

I have known Zimbabwe for almost 30 years, worked there as a teacher and teacher trainer from 1985 to 1991, and got to know Shona Art’s world-famous sculpture early on, and started a collection of smaller and larger sculptures with my wife.

During visits to the country in recent years, it became clear how much the artists are suffering from the tourists’ absence due to the tense economic and political situation in the country.

On the one hand, many of the Zimbabwean sculptors are world famous and have participated in exhibitions all over the world, but on the other hand they live impoverished in the countryside and have to make a living from other businesses as well. Collen Nyanhongo, for example, can not afford a computer until today, works under a tree outside without his own workshop. I’m just getting along while living in our house trying to launch an ancient gasoline tanker truck from England via Namibia to Zimbabwe to start a small transport business. The truck has already fallen several times on the track and still in Namibia, where Collen tries to organize the further transport with endless telephone calls, while he creates here our “Thinker”, a great work of art.

To point this out to my students is my main reason for inviting Collen Nyanhongo to the “We for Africa” project. For us, Africa sounds almost as if the way south is a one-way street. Collen shows with his tremendous artistic expressiveness that Africa is able to give us a lot. The Shona Art is universal, understood on every continent in the same way, because it expresses archaic and mystical forms that evoke similar sensations in different people.
Another benefit for students is the intercultural exchange in the foreign language of English, whether they are learning new technical terms from the sculp- ture language in English or small talk about living in Zimbabwe in the foreign language and thus applying and deepening their English language skills.

Here is the report from the Norderstedter Zeitung:

Zimbabwe’s Nyanhongo shows students how to beat the stones

The sculptor from Zimbabwe is giving a sculpture workshop to the Africa project and is working on a 2.60 meter high sculpture at the Lessing High School, for which he brought the stone from his homeland.